Calling all children and those who are young at heart! Be thrilled and be captivated by the beat of Madagascar The Musical in Kuala Lumpur this 5th – 8th December 2019 at the KLCC Plenary Hall!

Based on the smash-hit DreamWorks animated motion picture, “Madagascar The Musical” is making its way to Kuala Lumpur this 5-8 December 2019! Join Alex the Lion, Marty the Zebra, Melman the Giraffe, and Gloria the Hippo as they bring you on an exciting adventure as they make an escape from their home in New York’s Central Park Zoo and enter into the madcap world of the hilarious King Julien. Malaysia is the first in Southeast Asia to host the International DreamWorks Production.

Madagascar The Musical follows the story of Alex the Lion, the main attraction at New York’s Central Park Zoo. He and his friends have spent their whole lives in front of the public. Curious to see what else is out there, his best friend Marty the Zebra lets his curiosity get the better of him and escapes from the zoo and into the city that takes them on a wild adventure straight into the zany world of King Julien’s Madagascar!

The Plenary Hall at KLCC is set to be transformed into a colorful jungle world of the island of Madagascar with props and backgrounds depicting the animated motion picture. Audiences will also get to catch penguins Skipper, Kowalski, Rico, and Private as they are set to go on a wacky adventure along with Alex and his friends. You and your family are sure to be entertained with its lively performances, storytelling, dance, and music that will make you want to ‘Move it, Move it’.

“We are thrilled to be hosting Madagascar The Musical live in Malaysia for the first time together with International DreamWorks since its acclaimed UK Tour.  Madagascar The Musical is a vibrant and entertaining show, each of the characters have something unique to offer for the whole family to enjoy. By bringing these internationally recognized entertainment to our Malaysian audience, we believe this will help to further position Malaysia to be an entertainment hub in the region. We’re looking forward to more and exciting shows to come in the near future”, said Dato’ Grace Lee, Managing Director of Milestone Production.

Produced in the UK in collaboration with DreamWorks, Madagascar The Musical will feature iconic songs including “I Like To Move It, Move It” and other new songs that will surely keep audiences moving to the beat.

For more information on the show, cast and where to purchase tickets, visit http://www.milestone-entertainment.com or http://www.facebook.com/MilestoneEntertainment.Show/

It’s time to go wild! And if you need another reason, take a look at this clip!

Enjoy 25% off tickets when you purchase with your Maybank Card. Valid for Premium, VIP and Cat A tickets. Promo ends 8 Dec 2019.

About Milestone Production
Established in 2003, Milestone Production is one of the region’s leading show production company that provides unparalleled live entertainment experiences globally. We aim to cultivate appreciation of the performing arts in the region by bringing in internationally acclaimed West End and Broadway productions to Malaysia and to the rest of South East Asia, namely – “Mamma Mia!”, “The Mousetrap”, the multi-award winning Broadway production “Jersey Boys”, “Thriller Live”, “Saturday Night Fever”, “Potted Potter”, “Dr. Bubble With Milkshake”, “One Man Star Wars Trilogy”, “Dr. Balloon’s Science Adventure”, “Rumour Has It – Adele – Her Life And Songs”, and the iconic “An Evening With The Phantom Of The Opera”.

For more information on their past and upcoming shows, please log on to www.milestone-production.com.

Must Go’s: An Evening With The Phantom – Songs From The Musicals

Must Go’s: Celebrating Women Empowerment Through The Life And Music Of Whitney Houston

The night of the 4th of October 2019 was a sight to behold. Jazz fans from all walks of life braved the heavy Malaysian rain and the ferocious Friday evening traffic jam to come together to celebrate the life and music of jazz legend Nat King Cole. Taking up the mantle? Someone dubbed Europe’s version of Michael Bublé. His name? Bovy, Yannick Bovy! 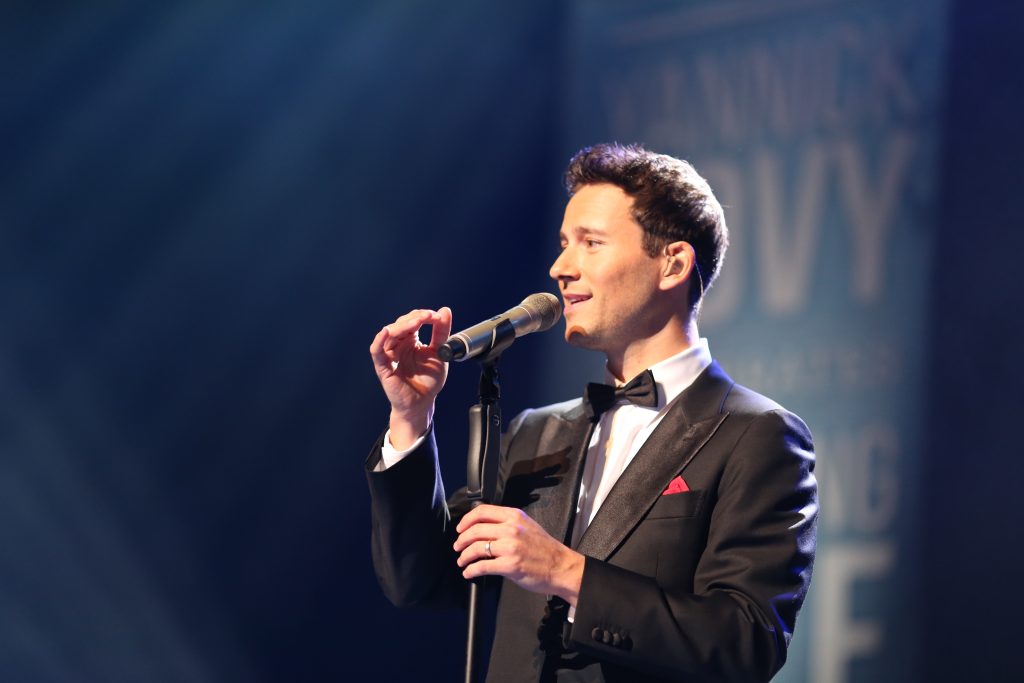 The wonderful performance held that night at Istana Budaya was hosted in aid of Yayasan Tunku Naquiyuddin, a charity organisation established in 1996, with its principal focus being on the B40 group, in which they provide financial assistance to needy students. The fundraising event was a successful one, as a total of RM330,000 was raised that evening alone. This special night was graced by royals and local celebrities such as Their Royal Highness Yang Di Pertuan Besar Negeri Sembilan and Tunku Ampuan Besar who definitely enjoyed the show, I was seated a few rows behind the Royal party and could see them having a good time. Also spotted was Malaysia’s very own Chef Wan!

Local jazz celebrity Sharizan Borhan played the double role of emcee of the night as well as the opening act, giving us his rendition of Sinaran by Sheila Majid. Then without further ado came Yannick, serenading us with Unforgettable, and sending the crowd into a frenzy of excitement of things to come.

Yannick showed off his singing chops not only by channeling Nat King Cole, but other legends such as Charlie Chaplin, Ella Fitzgerald, and Frank Sinatra as well. He also managed to squeeze in a few of his own popular songs during his 27-strong setlist!

Songs were introduced with the inclusion of several video clips of some of Nat King Cole’s peers remembering the legend. Yannick added his own personal touches to the evening by telling us stories of how he found jazz and how these legends changed and shaped his life.

Adding pizzazz to every song, Yannick displayed some smooth moves to go with his silvery voice, showcasing his strong vocal range. Furthermore, his great showmanship was evident that evening when he got the audience to participate in a sing-along during some of the songs. The multi-talented chanteur even sang a Spanish song called Quizás, quizás, quizás by Osvaldo Farrés, a song I found cute and memorable! 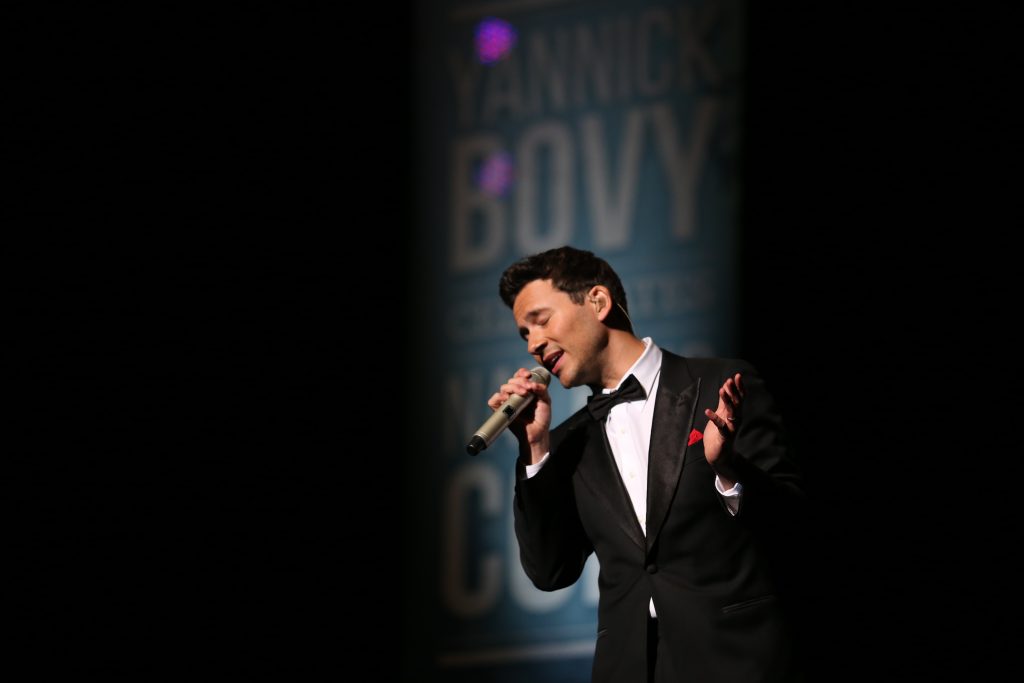 Also spotted that evening were a few couples in the audience swinging to the groovy tunes! A testament to the good music on offer that night.

The charming crooner had a few tricks up his sleeves, using the intermission to stock his stage with stalks of roses, which he gave out during his delivery of Route 66. Needless to say, this went down very favourably with the female audience members that night, myself included, although I was too far away from the stage to attempt to get a rose. 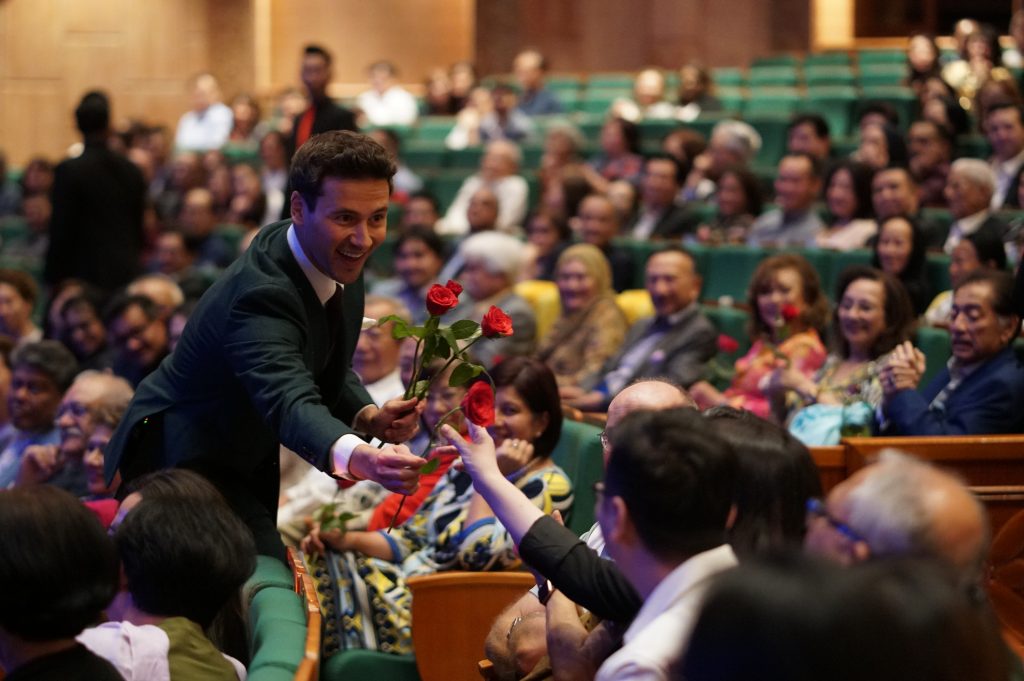 One of the most surprising moments of the night came right at the end, when Yannick thrilled the crowd with P. Ramlee’s Getaran Jiwa to close out the evening! Singing it in perfect Malay, the audience went wild with applause, and rightly so. 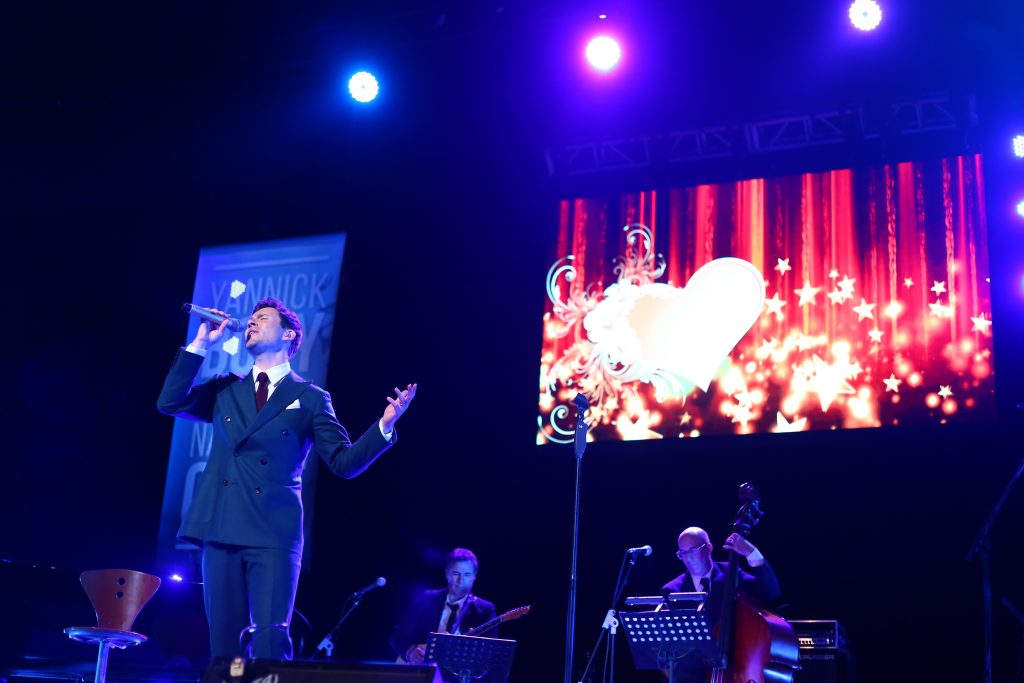 Personally, I was treated to a few new-to-me jazz songs that evening, some of which have stayed with me even days after the performance. If you want to know my verdict, Yannick is better than Michael Bublé in my book! #sorrynotsorry

He even posed for pictures with the guests in attendance that evening even after the tiring performance. A true gentleman indeed. 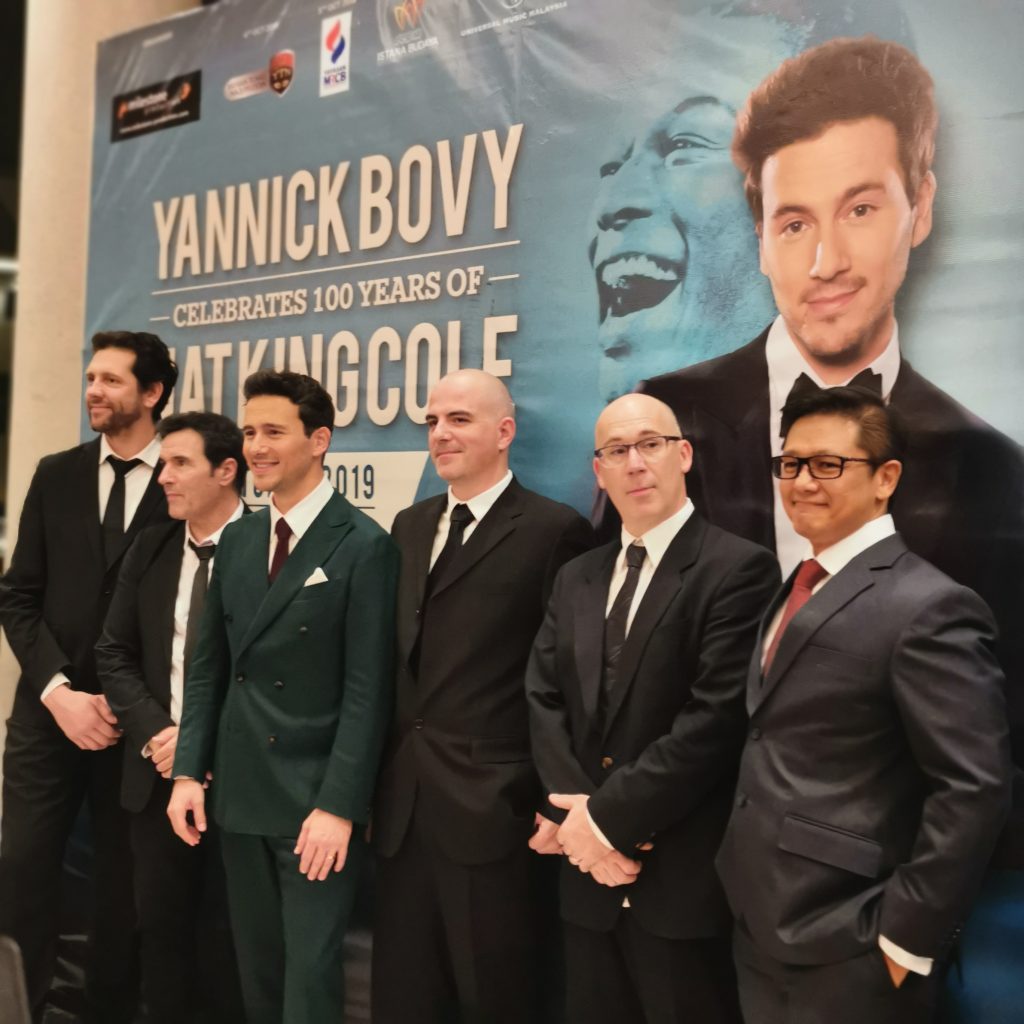 Huge thanks to Milestone Entertainment for the lovely invite and for bringing Yannick to our shores. It was indeed a great night. I want More!

Yannick started his musical quest in Belgium, his home. His debut album, ‘Better Man’ consists of 15 tracks. ‘Better Man’ can be described as a classy tribute to the Big Band, crooner and jazz traditions of yore, spiced with solid own work and surprising covers including absolute classics such as “I’ve Got You Under My Skin” (Sinatra), “My Cherie Amour” (Wonder) and “All My Loving” (Beatles).

Yannick Bovy’s music can be heard in all corners of the world. Songs from his first two albums ‘Better Man’ and ‘All The Way’,  just like ‘Theoretical Love’, ‘She’s Even More Beautiful’ and ‘Six’ soon found success in the German, Polish, Greek, and also Brazilian, Indonesian and Thai charts. He has been a supporting act for Lionel Richie, Tony Bennett and Lady Gaga, and has taken to the stage with Lisa Stansfield and Amy MacDonald among other greats.

It was the Belgian music legend Wil Tura, who out of his great love for jazz and swing, presented Yannick with a number of songs with an international character that would form the main thread for ‘Love Swings’, his third album. His music career recorded a great success worldwide with Malaysia ranked in at the No.2 spot of most Yannick Bovy fans in South East Asia.

In April 2019 Yannick Bovy released his album “Yannick Bovy celebrates Nat King Cole” as a tribute to Nat King Cole’s unparalleled repertoire.  The album already got rave reviews from fans around the Globe and the singles ‘Let there be love’ and ‘Let’s face the music and dance’ can be heard on radio’s from Europe to Canada and the Far East at the moment.

Must Go’s: An Evening With The Phantom – Songs From The Musicals

Must Go’s: Celebrating Women Empowerment Through The Life And Music Of Whitney Houston

Must Go’s – Remembering Whitney – The Greatest Love Of All